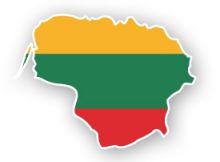 Official language– Lithuanian, which is the member of Baltic language group (other 2 members are Latvian, and dead Prussian language). It is the most archaic language from all the Indo-European languages.

Lithuania is considered to be very religious country. Today 79 percent of Lithuanians consider themselves as Roman Catholics.

On 1 January 2015, Lithuania adopted the euro as the official currency and became the 19th member of the Eurozone.

LithuanianRepublic is the parliamentary democracy. The head of state is The President. Executive authority is Prime minister and the cabinet, and the legislative power is in the hands of parliament.

The biggest cities in Lithuania:

Lithuania is at a crossroad between west and east Europe, and throughout its complicated history has developed a unique culture, which encompasses both deep respect for traditions and robust wish to learn and innovate. We are members of EU and NATO, and are among the most bilingual and educated nations in Europe, however costs of living here are lower than in western countries, which makes Lithuania great for tourism, education or business.

Lithuanian people are simple, calm and can be somewhat shy with foreigners, but friendly and good-intended when you get to know them. We are keen to share our experience and the way of life with the rest of the world. If you plan to visit, you are certain to leave with dozens of new friends.

Klaipeda, Lithuania ... Firstly the thing that surprised me the most was the beach, just because I was not at all expecting that kind of beach here, the sunset is the best, even it will be cold there I wanna go anyway. The city of Klaipeda is really beautiful, because of the architecture and it is really clean.
It is a little difficult to understand some people like the oldest, because they do not speak English, but at the same time it is a challenge for all of us, because we need to talk with each other, so we need to get another way to explain and learn other languages too.
I am enjoying this experience too, because I can pursue my dream of traveling to a lot of countries, mainly Poland and Czech Republic, Latvia, and improve my english and myself too.